This question was asked by a customer after reading the earlier article Legal: You can be cheated using Track Changes

It sounds like a way to use technology unethically… But others may be doing this to you – without you realizing it. After reading this article, you will know what to do! 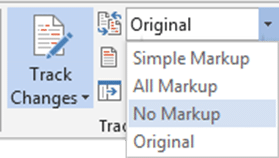 Here is how you do it.

How do you know if someone has sent such a document to you?

This is simple. I am sure you already guessed it.

Go to Review tab. If Track Changes is enabled and the dropdown shows either Final or No Markup, it means the changes are hidden. Just change it to All Markup or Final with Markup to see the changes you are making.

Sounds unethical? It is not. It does not work at all.

Why? Because changing the setting to No Markup is a temporary setting. If you close and reopen the document, markup is shown anyway. Simple Markup option does get saved.

Then why did I write so much about a feature which does not work? Because that way you learnt these options. Everyone loves “politics”. I played a little politics to help you learn!

(I had missed this point. Thanks to a cautious reader “GDH”, I have corrected the mistake).

Use the Compare option on the original and edited file to get exactly the same result – it is like turning ON Track Changes in retrospect!

Now the question is this. If track changes is ON, will the same person do different modifications? Unfortunately, I don’t have a definitive answer to that. May be someone has done some research on this. But I don’t know.

Having said that, I feel that if Track Changes is ON, anyone would be more careful about the changes which are being made – because the fact that changes are visible – is visible to the person editing the document.

Without visible tracking, I feel people will be a little more relaxed if not careless while editing.

What did we learn?

Why write about Office Politics?

By the way, I am neither an advocate nor a critic of Office Politics. I am just using that title to attract your attention.

My objective is simple – I want to help you appreciate and learn the nuances of Microsoft Office so that you can use them to grow faster in your career.

Office is a catalyst to your growth!

What do these options mean?

In older versions of Word (before 2013), it showed you four options. These options sounded so confusing that hardly anyone clearly understood what they meant.

Note that none of these options accept or reject any change. It is just for visual convenience.

Confusion is gone with Word 2013

Microsoft realized that these options are very confusing. They also realized that a document with tracked changes from many different persons looks very scary and even more confusing. So they changed the whole thing in 2013 to make it simpler and easier to manage.

All Markup is exactly same as before. Similar to Final with Markup.

Simple Markup is very nice. It shows the final version as though you have accepted all changes. But shows a red line on the left margin to visually show that there is some tracking in that paragraph. Clicking on the red line changes to All Markup mode. This is simple, intuitive and effective.

No Markup is like simple markup, but it even removes the Red lines. It still shows what would the document look like if you accepted all changes.

Finally, Original shows exactly what it is meant to show. The original document BEFORE any tracked changes were made.

There are may more useful things related to Track Changes.
But we will cover those in another article.