These two methods DO NOT work together.

Read on to find out more. 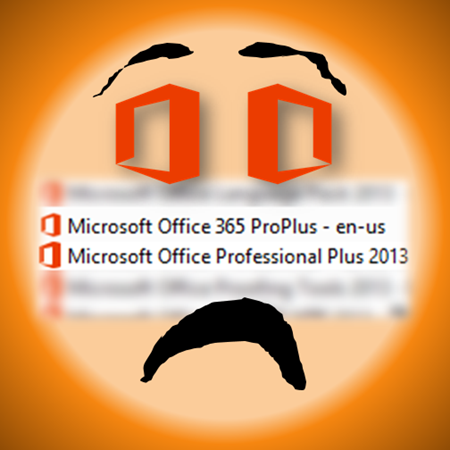 I am oversimplifying it to convey the key point. Office 2013 installation could be of two types.

Office 2013 can be installed using the regular setup.exe.

Alternatively, if you use Office 365 E3 (or equivalent) subscription, it is possible to install Office 365 from internet directly (shows red box while installing). This is called Click2Run (C2R).

The problem is that these two versions are NOT supposed to work with each other. Only one of them should be installed on the same PC.

I have noticed that many users are suffering because of this mixed setup.

As a user what should you do

If you have noticed that your Office 2013 version is behaving erratically, has slowed down after installing it from Office 365, this could be the reason.

All that you have to do is to talk to your IT team and ask them to read this article.

The solution is to keep only ONE kind of Office 2013 on a single PC.

How to check if you have this problem

Go to Control Panel – Programs and Features.
Check if you can see two versions of Office in the list. Something like this …

This is a disaster.

Which one to remove

Technically speaking, if you have a choice, the Office 365 ProPlus (C2R version) is better.

If you are a user, DO NOT randomly remove one of the versions. Escalate it to the IT team and let them handle it.

Older version of Office CAN coexist with new version

The newer method of installation was created so that older version macros or application can continue to run using older Office and the C2R version will provide Office 2013 on the SAME PC.

This saves you the trouble of doing compatibility checking and rewriting some macros. This is a great feature and you should use it, if relevant.

The only issue is that the two versions of 2013 are not compatible with each other.

PrevPreviousApplied Knowledge: Show an Iterative Process using SmartArt
NextWhy and How to use PowerPoint Transition OptionsNext