Types of Comments in Microsoft Excel

The old comments are now called “Notes”. The New Comments are actually discussion threads – like in Word. You can type a comments and others can reply to it. Spend 4 minutes to learn about the new comments.

What happened to old comments?

Of course, the old comments will stay. Existing comments will work exactly the same way as before. They are still the same old Yellow color and show up as a red triangle in the right top corner of the cell.

The difference is that those are now called “Notes”. You get a new menu next to the existing Comments menu in the Review tab of the ribbon.

What is the benefit of New Comments?

Now, the New Comments feature makes this easier. The comment you add has a reply button. The reply also has another reply button.

Therefore, the comment becomes a base opinion followed by further discussion on that topic.

How will that person know that you have added her name inside a comment? Don’t worry.. all of it is taken care of.

When you add someone as @mention, Excel will check if they already have access to the file. If not, you will be asked to Share the file with them. 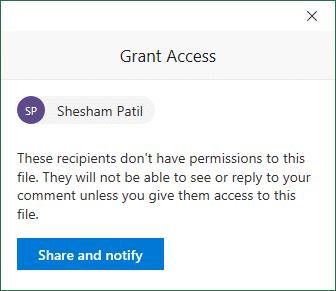 Word and Excel as well

The New Comments feature is available in Word and PowerPoint as well. @mentions and associated sharing is also supported.

In case of Word, each comments has an additional button called Resolve. This is useful when someone has put comments in your file while reviewing it.

You are trying to go through the comments one-by-one and act upon each comment. When you finish working on the comment, you want to remember it. That is when you click the Resolve button. Now the comment becomes greyed out so visually indicate that it is resolved.