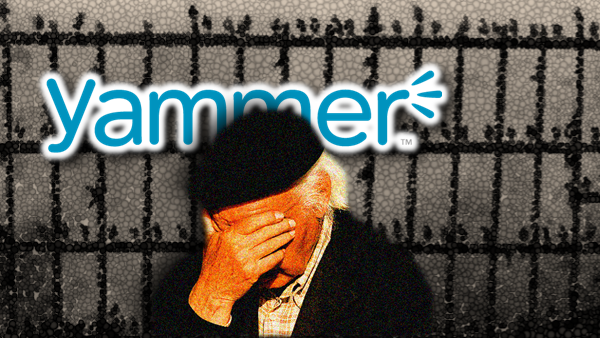 Many customers are worried about this. Even before they have even tried using Yammer. Here is a detailed analysis of these concerns and the recommended solution.

Learn from the past

The simplest way to address a new concern is to check if similar problem has arisen in the past. Just to refresh your memory, any new technology is always associated with some concerns.

When email was introduced, everyone was worried that some rogue employee will send a mail directly to the CEO. Same concern existed when Lync was introduced (OCS). Similar worries manifested themselves with introduction of SharePoint.

We also worried about the fact that anyone can send a mail to anyone else and violate organizational compartments, boundary or hierarchy.

What happened? Nothing serious at all. Some random person must have sent a mail to the CEO but that is obviously going to be ignored. It is an insignificant thing to worry about.

We are now in a similar situation while considering deploying Yammer and making it available to all the staff members across the organization.

All valid concerns. No doubt. But let us discuss each logically – without getting flustered.

Genuine concern. This is the first time people are being given a chance to put something which a large number of others can see (potentially).

Now there are two scenarios here:

In the first case, the person simply needs to be educated and the post removed. Next time he/she will be smart enough to learn the lesson. Usually, even before administrator or the Yammer manager can take action, other users themselves will either point out the mistake, reprimand the person or just talk to him / her personally to compel them to remove it voluntarily.

In the second case, think of it from the point of view of the person who is intentionally putting objectionable, obscene, offensive, derogatory stuff on Yammer. Why would I put  things under MY name which I KNOW are offensive? I must be a complete idiot to spoil my own credibility and reputation to do so. If there is such a person who is so dumb and self-destructive, he/she should anyway be removed from the organization – because the same attitude is going to reflect in the rest of the work performed by that person.

Do you want to employ one or more people (full or part time) to monitor every post with a hawk eye? If you have excess staff and you cannot remove them for some reason, this is a perfect way of giving them some activity to do. But I don’t think any organization has excess staff for a sustained period of time.

Don’t waste time policing it. Let it mature on its own. Even if you do not monitor it, someone will alert the Yammer team and then you can take action. The job of Yammer team is not to waste their talent and the potential of the platform in such a petty and myopic activity. Their job is to utilize the platform to make new and useful things happen which were impossible to do without using Yammer.

The person posting the “crib” has obviously tried the regular channels to resolve the issue. If it is not solved by defined channels, what is the chance that it will be solved by posting it publicly in Yammer? There are two outcomes possible…

This is similar to the above scenarios but it concerns office politics more than obscene content. Again we have few sub-scenarios:

In the first case – it is an ethical issue. If I am a part of some wrong-doing, either willingly or forcibly, it is in my interest NOT to talk about it. If you don’t like it, try stopping it. If you cannot, leave the company. Simple.

In the second case, it is easy to respond to the false accusations and prove that it is wrong. This undermines the credibility of that person and automatically achieves the moderation effect which we have been wanting anyway.

In the third case, the person is a whistle blower. Many things can happen here. If the wrong doing was being done with top management connivance, it will usually lead to this person losing the job. So we don’t have to worry in Yammer context anyway.

If senior management did not know about it, they may take action and correct the wrong-doing proactively – which is a positive and desirable outcome.

If people who are doing the wrong stuff KNOW that someone has exposed them, they will obviously do something to damage the career (and / or anatomy)of the whistle blower. Obviously, the whistle-blower knows that. So why would she/he take the risk of doing it publicly? Either she is capable of taking care of herself or she will do it in a more private way (approaching the top management or concerned authority individually).

In short, this concern is not real!

Some mild but stupid posts

If I ask the entire company which restaurant I should go to with my spouse, it is obviously a misuse of Yammer. The post itself is not wrong, but the place where it was posted (All Network) is wrong.

But the solution is not to ban personal questions. Create an open groups like Food, Fitness, Family, Work-life balance, Recommended Things and so on. Soon people will figure out the right place to put the content.

On the other hand, if I ask which restaurant I should go to with a key prospect who is visiting our company, it may be a valid question for All Network (because I want anyone with relevant knowledge to help me).

If someone wants to intentionally do some kind of damage to or revolt against the organization, they will do it anyway. Presence or absence of Yammer (or for that matter, any other technology) is irrelevant.

If I want to do something against the company, can you give me some credit that I will not be so stupid to use company infrastructure which will expose me instantly?

Obviously they would do it WITHOUT using any organizational infrastructure at all – to prevent detection of any objectionable activity.

Think about it. Will anyone post their Resume on Yammer? In a sense, the fact that you are planning to move is also an anti-organizational kind of activity. Right?

In most (not all) cases, the initiative gets lot of attention and hype initially. Few enthusiastic users (not all) / departments post lot of stuff. Many groups get created. People get their mailboxes flooded with Yammer notifications. Then they go and change the notification settings to daily or weekly. In the initial excitement, we create lot of networks and groups. Soon we lose track of which groups am I a part of. That ambiguous state continues. Eventually the excitement subsides. Most users do not even know about the existence of Yammer. Some know it but have not sustained the effort. Finally few people / departments continue to use it to their advantage and rest of the organization just continues working as before.

The initial concern about people misusing Yammer seems laughable and too insignificant.

I know this is depressing. But let me make it even MORE depressing. By and large, this can be said of any technology which does not automate a transactional or statutory or core business process.

Does it mean the technology did not have or does not have the potential to add value? Of course it does. But there is nobody doing it. So it just dies its own death.

Yammer is not the answer to all communication needs. There are other tools like Outlook, Lync, OneDrive and SharePoint Sites as well. It is easy to get enamored by one tool and misuse it while not using other tools at all.

Read this article to know the right use cases for the each of these tools:
Confusion: Which method of communication to use when?

You have to draw your own conclusions. But NOT at conceptual stage. Do it and then get worried. Not before. There is lot of great content available about positive and empowering use of Yammer. I also wrote one article just yesterday: Opinion: The REAL use of Yammer.

Just open it up. Provide simple guidance on the practical situations where it adds value. Just publicize the fact that EVERYONE can see the content and you cannot post anything anonymously. So you are responsible for what you post.

DO NOT mention what should NOT be done. Trust your employees. They know that much. If you really have untrustworthy employees, then your organization has a big problem elsewhere. Don’t blame Yammer or any other technology for that.

Do NOT. It is a community. The community is much smarter than the sum total of individual intellect. If something wrong happens, the community will highlight it automatically.

Unintended mistakes should be dealt with education rather than admonition. Tell them why their post was wrong and show them the right way. Simple.

Unfortunately, most technologies are easier to misuse and underuse. Even more unfortunately, we pay too much attention to the negative aspects and hardly any attention (and proactive, sustained effort) to the positive potential. Reverse this and you will grow beyond your imagination.

PrevPreviousHow does Outlook help prevent silly mistakes?
NextTired of long mail trails? Why not just chat and finish it off?Next