Instead of Find Replace, we will explore another approach to make our writings more gender neutral – Automatically. 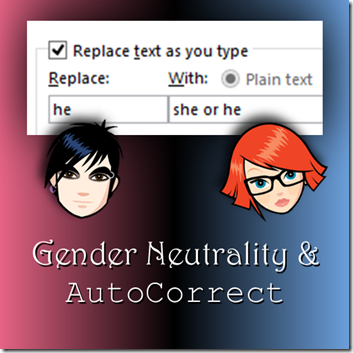 This feature has been there for many years. It used to be in the Tools menu – Tools – AutoCorrect. Now it is difficult to find. But it is not gone. It is very much there. In fact it has been extended beyond our wildest imagination. But more on that later.

For now, we want a method where gender sensitive words can be converted to gender neutral words. So in that sense, wrong words are to be corrected to RIGHT words. This is the job AutoCorrect has been doing for ages.

How does it work?

Start Word. Press ALT T (then release both keys ) and type A. 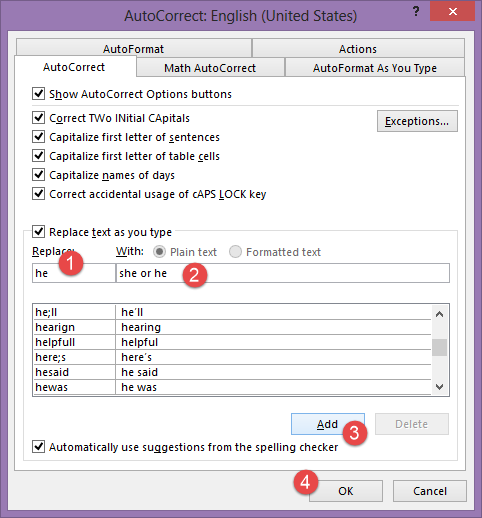 Now anytime you type he, Word will automatically replace it with she or he. Neat and automatic. Now you can add as many words as you want … Policeman with Police Officer, Stewardess with Flight Attendant, Mankind with Humankind and so on.

These entries can be created by a central department and then transferred to the corporate template so that everyone gets such mistakes auto-corrected. Yes, enterprise wide deployment is possible. But I will cover that in a separate article.

The obvious problem with this approach is that if you need to genuinely write he, Word will always replace it with she or he. Of course you can do UNDO, but that is irritating. Therefore, Microsoft gives you another simpler shortcut – BACKSPACE.

Just type BACKSPACE to cancel the AutoCorrect and revert to the original word. Now you have best of both worlds.

You will see that the AutoCorrect dialog is not empty. Microsoft has already added commonly misspelt words and common substitutions like © for ( c ) and so on.

Just out of curiosity scroll that list and see how much effort has gone into making our lives easier. It is just that this happens behind the scenes (actually right in front of our eyes), but we simply don’t notice it. Remember that Office is available in many languages and every language has its own AutoCorrect!

AutoCorrect can also be used as an automatic mechanism to correct words which you often spell wrongly. This saves you additional time which you would otherwise spend in manual spell check.

Why did Microsoft sort of remove AutoCorrect from the UI? Of course it is still there, the shortcut works and you can add it to Quick Access Toolbar.

But Microsoft added a much more sophisticated feature to Word called Building Blocks which is a quantum leap in reusing parts of documents and also correcting mistakes.